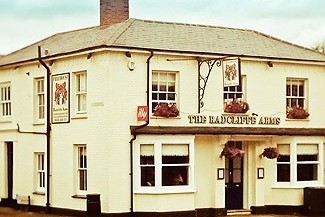 Followers 1
Directions
Nearby
The best Restaurant & Bar in Hitchin. Book on 01462 456 111 Supperclub Menu every Monday Evening
The Radcliffe Arms is a Victorian pub in Hitchin, on the corner of Walsworth and Verulam Road. It was built around 1855 from red London brick, in a mix of styles, late Georgian villa, but with the classic Victorian bay windows, which let more light into the building. It was originally known as the Nightingale. The name was changed to The Radcliffe Arms in the late 19th century and was owned by local brewers Hall & Hall and then Lucas. Evidence suggests that by 1916 it was fully licensed, and passed to Greens of Luton in 1918 during the disposal of the Lucas empire.

Up until then, all of the pubs in Hitchin had been coaching inns, with as much space for horses as for people. Take a walk round the yards of the Red Hart, or The George (named incidentally after George Washington, not one of our Kings!) and you can still see the old stables. With the arrival of the railway, it meant the end of horse-drawn coaches, and new purpose-built hostelries were built, often in the vicinity of the main stations. Slowly, houses and communities would grow up around these, and the pubs would gain trade from local residents, particularly around the turn of the last century, when train speeds were faster in some cases, than they are today.

The Radcliffe family came originally from Lancashire, and moved to Hitchin to take up residence at the Priory, which had been confiscated from the monks, by Henry VIII, upon the establishment of the Church of England. The Radcliffe family bought the Priory Estate in 1548, and stayed there until 1965, when the last surviving member of the family sold the estate. The Radcliffes’ have played an important part in the social and cultural development of the town over those centuries, and it is in their honour that the Radcliffe Arms is so named. They have a road named after them too, and the South Chapel of St Mary’s Church holds the tombs of many members of the family.
EditVIP accessI'm the licensee