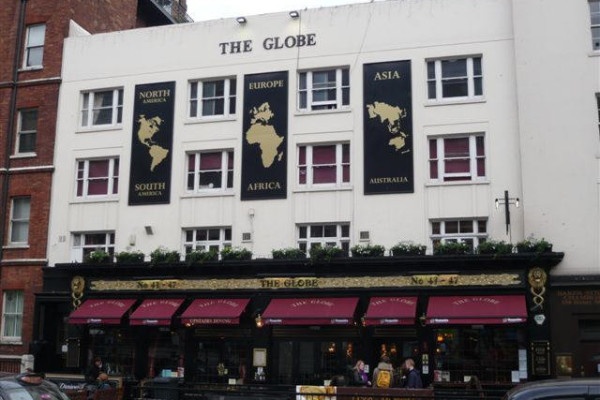 COVID-19 update: Please be aware that our trading times and published events may not currently be wholly accurate.​

Followers 0
Directions
Nearby
The Globe is a traditional English pub set on Marylebone Road opposite Baker Street Station, just a stone's throw away from Madame Tussauds, Sherlock Holmes Museum and Regents Park
The Globe pub is a traditional British London pub in Marylebone serving great freshly cooked traditional pub food. We also serve a fantastic range of beers from around the world, warming red and crisp white wines and a fantastic selection of spirits. The Globe Tavern was built in 1735 at the time of the building of Marylebone Road and adjoining Nash Terraces. The Globe is a traditional pub with an interesting past. The first ever service from Holborn Road stopped here.

Built next to the Globe, the Metropolitan Railway line is the world's first underground railway opening in 1863 between Paddington and Farringdon Street, to connect the relatively remote terminus of Paddington with the city. Many famous characters have been patrons of the Globe including Charles Dickens who learned of the tragic death of his daughter whilst delivering a lecture. The youngest Prime Minister in British history, William Pitt the younger, was born close by and was likely a customer.

This is because In 1773 Pitt suffered an attack of gout, and Dr. Anthony Addington (father of PM Henry Addington) prescribed a bottle of port a day as the cure. Pitt was only fourteen years old but he continued to drink throughout his life. Henry Addington commented 'Mr. Pitt liked a glass of port very well, and a bottle better'. Sir Arthur Conan Doyle worked in nearby Park Road and would have been a regular diner along with the writers, critics and glitterati who frequented the tavern.
EditVIP accessI'm the licensee